Thanks for checking out the first installment of Great Grooves, a series of educational posts on West African drumming.

In this post, you will learn about — and listen to — Gahu (Gah-HOO), a recreational style of music of the Ewe (EH-way) people of Ghana, Togo and Benin that is popular around the world. Many posts, including this one, will also feature interactive African drumming multitrack mixers.

According to Ewe Master Drummer Emmanuel Agbeli of Kopeyia, Ghana, Gahu is an adaptation of Kokosawa, an older African drum-and-dance style that originated with the Yoruba people of Nigeria. In his telling, the Ewe took Kokosawa and increased the tempo to more than double its original value, resulting in the much livelier Gahu. Because Gahu is social music, it has no inherent religious or spirituals connotations, nor is it reserved for a specific time of year or specific people in the community.

A traditional Gahu ensemble is comprised of six different instrument types (pictured below), each with a distinct construction, sound, and rhythmic character: 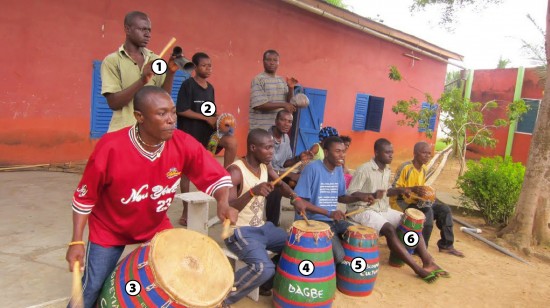 Because Gahu belongs to a folk tradition, varying renditions and interpretations abound, not merely among neighboring countries and regions, but even neighboring villages. The overall structure of the present-day arrangement of Gahu that one finds in Kopeyia, Ghana, begins with a short introduction of the much slower Kokosawa (a nod to Gahu’s roots) followed by the up-tempo main section that is, broadly speaking, what we might think of as a sort of rondo:

The main A section of Gahu — which is referred to in Ghana as “free movement” on account of the breezy, economical style that characterizes the dancers’ movements during this section — is almost always followed by a contrasting B section, which is known as “serious movement” due to the increased intensity of the dancers’ movements. Serious movement is almost always placed directly between free movement and one of the variation sections: C, D, E, F, G and H, respectively.

Using the interactive multitrack drumming mixer below, listen closely to what all six ensemble parts sound like during the free movement A section of the present-day Kopeyia-style arrangement of Gahu. Tempo is moderate for purposes of teaching and learning.

Tracks are listed, along with play, stop, pan, volume, and mute controls.

Play -> plays all of the tracks at once.

Pause -> stops all the tracks at once if currently playing.

Resume -> stops all the tracks at once if currently playing.

Through workshops and award-winning cultural immersion trips to Africa and Cuba, ThisWorldMusic brings the vibrant music, dance and culture of the African Diaspora to students and professionals around the globe.

Our mission: To create cultural bridges between people and communities worldwide through a shared loved of music and the arts.