Today on the ThisWorldMusic blog we are pleased to feature the first in a two-part guest post from Elizabeth Green, a music educator in New York City and participant on the summer 2012 ThisWorldMusic Study in Ghana program.

Picture it. 2 p.m, 6th grade band rehearsal, a small northeastern U.S. town. I am lost in enjoyment among the other young instrumentalists as we all try to out-play the oboe section, which is wowing everyone with their delicate rendition of “All-Play! #56.”

This was the time of day to which I looked forward the most. I was convinced that instrumental music was my future, and I excitedly mapped out the rest of my career daily during my next period class. What a wonderful career it would be! I would become a beloved band teacher, with multiple ensembles filled with a diverse bunch of eager students. They would choose to come before school for marching band practice every day and stay late to practice their instruments. I would have my own office that would hold multiple awards given for superior performances by my ensembles at world-renowned music festivals.

“I moved to New York City to begin my music teaching career — the land of culture, diversity and street meats. I landed a job at a middle school in Queens, where a concert band had not been up and running for at least fifteen years.”

My vision was only slightly shaken when I made the cross-country trek with my family to Las Vegas, Nevada, to complete high school. Aside from any cultural and environmental shocks I encountered (e.g., slot machines in the grocery store), band classes were similar to those I had left. I noticed, however, that in my very large, 3,400 student high school, music classes were filled with mostly high-performing white and Asian students from monied families. Most students took private lessons, had pools in their backyards and drove cars that had never been listed on Craigslist for “$1,000 or best offer!” My new high school was filled with socioeconomic and racial diversity, but the only music classes that seemed to attract students from other demographics were the guitar ensembles.

In college, I continued the pursuit of my childhood dream. I moved back to the Northeast and began studying music education at a good state university. My classes included correction of podium body language for conductors, secondary instrument study (mine was the bassoon), restringing French horn valves and “secondary dominant hunts” that excited me like no “Where’s Waldo” book ever could. I couldn’t wait to begin teaching at a prestigious high school, with three concert bands, group pullout lessons and AP Music Theory!

I moved to New York City to begin my music teaching career – the land of culture, diversity and street meats. I landed a job at a middle school in Queens, where a concert band had not been up and running for at least fifteen years. The white and middle class community had trickled to the suburbs and the neighborhood had begun welcoming new immigrants. The families of the recently immigrated students couldn’t afford instruments, and the program had gradually become too expensive for the school to continue. The time and money had been reallocated toward English and math books, and the band room had been repurposed for another class.

I was shocked! No instruments? No concerts? No seeds of music literacy planted early? On my first day, I stood in front of thirty six 7th graders from 10 different countries, all of whom were already restless and rowdy only minutes into the period. This didn’t look at all like the career I had dreamed of all those years ago, and it definitely didn’t resemble the public school music conditions in which I was trained to work. I was only 22 years old, with a 3-month-old degree; was it possible that my training was already obsolete, or had it had never been relevant in the first place? READ PART II ›› 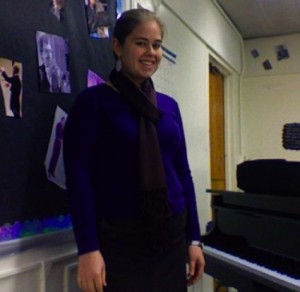 Elizabeth Green is currently a music teacher at Promise Academy Charter School in The Harlem Children’s Zone. She holds a B.A. in Music Education, with honors, from SUNY Fredonia, where she was President of the collegiate chapter of the National Association for Music Education. She went on to earn an M.A. in Music Education from the Columbia Graduate School of Education.